Sarah was a much travelled lass, born in Lidgett Town, Pietermaritzburg in 1853. When her family decided to try their fortunes in Australia, she sailed with them in a small schooner for Sydney, where they arrived in 1855. Teaching was clearly an important focus of the family. Her father Jonathan was head teacher at Warwick and Maryland schools whilst her uncle, Thomas, was the Inspector of Schools at Goulburn. Sarah trained as a pupil teacher at South Toowoomba school from 1869 to 1873 and then continued as an Assistant Teacher until 30 June 1875 when she resigned. She looked forward to a bright future.

7 January 1875, Tenterfield. Sarah Maria Harris married Thomas Chapman at the home of her parents, Jonathan and Maria.  Sarah had taught since 1 April 1869 but life with Thomas now lay ahead. 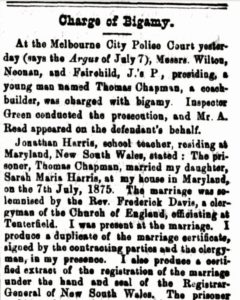 ‘Not guilty,’ was Thomas’s response. ‘I was married in England, but not in these colonies until I married Miss Crossland in Melbourne, May last.’ His guilt was clearly evident as Jonathan presented a duplicate of the marriage certificate, signed by the contracting parties and the clergyman. Being a careful man he also produced a certified extract of the registration of the marriage under the hand and seal of the Registrar-General of New South Wales.

Not only did Thomas not admit to his marriage but just three days after Sarah’s confinement the prisoner absconded without giving warning to anyone. Instead of her hoped for future Sarah found she had married a rogue! Her shame was spread Australia-wide in the newspapers when the case went to court.

“Not lost; but gone before.”

So read the death notice of Laura Lillian Harris Chapman. The precious child born of Sarah’s marriage was taken by diphtheria at Warwick on 31 December 1879. Age just 3 years 8 months.