There were exactly thirteen bakers in the family – early mornings, hot ovens, and flour dust everywhere![1]

Three left their Cheshire village where fine footwear was the family trade and established themselves as bakers in the booming metropolis of Manchester in the 1850s.[2] One dreamed of better prospects though and, after the loss of his young daughter, James Ainsworth set sail in 1863 for Moreton Bay on the Light of the Age.[3] Even the name of the ship conjured visions of better things ahead.

Death haunted his new start with the loss of a second daughter on the voyage. Undeterred, James set about establishing himself in the fledging town of Brisbane. From this tenuous beginning grew a great family of bakers each experiencing both highs and lows in their lifetime. Two though stand out among the others – James and his son Augustus Harold. James achieved some remarkable things during his long life but also suffered deep despair. His son, Gus, was known as the black sheep of the family.

After a spell of several years as a journeyman baker following his arrival in 1863, James established his own business in Grey Street on the south bank of the Brisbane River. With limited access to water and the basics for baking, conducting a business must have been fraught with problems. In spite of these difficulties, he remained in South Brisbane and, just 20 years after his arrival, he expanded – amalgamating another bakehouse with his own.[4] 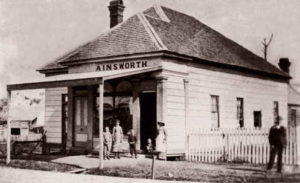 James served his community on trial juries,[5] assisted those in distress,[6] supplied the orphanage with bread[7] and was well respected by others in his profession.[8] In 1889, he was instrumental in establishing The Queensland Milling Company which, just a short six years later, held first place in the flour-milling business in Queensland.[9]

Though all reports appear to indicate James’ business interests were flourishing, clearly there were problems. Many setbacks arose along the way – in 1879 parts of his bakehouse were destroyed by fire and in 1878 and again in 1898 James was adjudged insolvent.[10] That he recovered at all from the sale of his entire estate in 1878 – all his furniture, shop, horses, spring-carts, milking cows … even his bed – seems remarkable.[11] Unfortunately bad debts had James back in the courts again in 1898 – his liabilities stated at £3,763 4 shillings, worth almost half a million dollars today![12]

Did James take to alcohol to try to forget about his business problems? The records show that, in 1900, he was arrested for drunkenness.[13] Family stories also recall how he lost a gambling wager to a fellow director of The Queensland Milling Company.[14]

His life was now in a downwards spiral and, in 1903 in a further bid to solve his problems, James leapt into the Brisbane River from Victoria Bridge.[15] Reports tell how he was rescued by ‘three men in a boat’ and brought to shore ‘apparently none the worse for his immersion’. What could well have resulted in his death ended instead with his removal to the South Brisbane lockup. James disappeared from the records following that incident until he died at home in 1918 aged 83 – once very successful but plagued by problems toward the latter end of his life.[16]

And Gus? His great niece, Mona, declared him to be the black sheep of the family.[17] Like his father and brothers, Gus was a baker.

Though his baking career began away from the rest of the family in the dry, dusty west at Doondi Station near St George, Gus had returned to Brisbane by 1901.[18] It is, however, likely Gus struggled to find work after he and his wife Florence were found guilty of slander and, just days later in April 1902, declared insolvent.[19]

More trouble loomed. Whilst working as a ‘warder baker’ in 1913 at the St Helena Penal establishment, Gus succumbed to requests from a prisoner to post letters for him. Caught out. According to the court records it was the first prosecution of its kind and a heavy penalty had to be inflicted.[20] Disgraced. Gus and Florence fled, never to be heard of by family again. 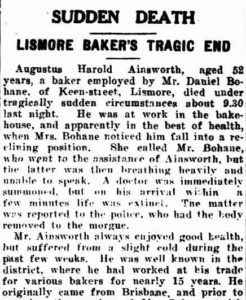 So where did Gus go and what did life hold for him after such an inauspicious beginning? Though none of his Brisbane family seemed aware of the fact, records reveal that Gus and Florence fled to Blackall, Murwillumbah and, finally, Lismore.[21] Did the locals know his background? In 2015, the discovery of his 1925 obituary titled ‘Lismore Baker’s Tragic End’ revealed all. We learn of a man respected in his community, a man of temperate habits who collapsed and died while working one evening at the bakehouse.

Gus never scaled the heights that his father had reached as a baker and none of the extended family learned of his reform. Both Gus and James had experiences on the wrong side of the law. Did Gus or any of the family know that James also had a brush with the law in 1875 for short selling bread?[22]

Were they successful or a disgrace to the family? How James and Gus were remembered depended not so much on the facts but on what family knew and what was hidden. In the end both had their troubles and, in their different ways, both were successful!

[7] In 1891, reported as supplying the Diamantina Orphanage with bread

[14] Information from Joyce Beeston, a great-granddaughter, 1985

[22] Short Selling. The Queenslander, 17 April 1875, p.2 (James found himself in trouble with the Inspector of Weights and Measures for selling light loaves)