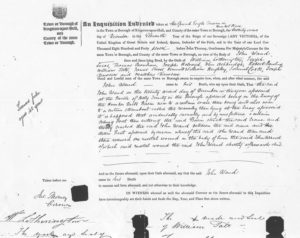 John Waud of Hull has a story with an interesting end. Born just days after the Abolition of Slave Trade Act was passed in the United Kingdom in 1807, he married in 1831 and had ten children. His was a life that was not particularly remarkable … until it neared Christmas in 1847.

As a porter at the Humber Dock Basin he headed down early from his home nearby at Spreadeagle Entry, Market Place. The day started routinely. Around 7 o’clock Jabez Mason, a police constable, “observed a fishing smack coming into the basin with her sails set”. John was nearby when “the smack ran her bowsprit against the free arm” of a crane which swung it around, caught John and threw him against the bulwark of the Waverley, a steam boat. Though he headed home complaining about his back and breasts nobody seemed overly concerned.

Just one hour later however, William Day, a surgeon was called—John was not looking good! He was “in a state of collapse” and with injuries which “seemed to be recent”. Day prescribed for him but with the later conclusion that he had died from ruptured kidneys or bladder it is difficult to know what prescription would have been any help. It is not possible to imagine how the family at home felt watching their husband and father suffer from such terrible injuries for the four hours it took him to die … and his wife already six months pregnant with their daughter Ann.